Our research addresses how animals cope with their natural world. As such the majority of our work is done with free-living animals and our field work will depend upon the system we are investigating. As such members of the lab have worked across the world from the Arctic to the Serengeti Ecosystem to the Andes of Argentina to the coast of the Pacific Northwest. We also have the ability to work in beautiful and unfragmented local sites, allowing access to state-of-the-art equipment that may otherwise be limiting. Below are some of our current and past field sites.

The Southeastern Massachusetts Bioreserve is a vast swath (>13 000acres) of forests, streams, and wetlands and one of the largest unfragmented forests in eastern Massachusetts, conserving a special ecosystem that protects clean water and provides habitat for countless wildlife species. This site is located near the University of Massachusetts Dartmouth where the lab is based. As such there are state-of-the-art facilities within a 30min drive. 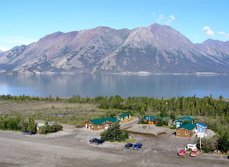 At the southern end of Kluane Lake lies the Kluane Lake Research Station, a scientific field station owned and operated by the Arctic Institute of North America. For 50 years it has provided a logistical base of operations for scientists from around the world. Amenities include cabins, showers, dining hall, internet, and telephone as well as on-site air support operated by Icefield Expeditions. There is also the neuroendocrine and ecophysiology research lab established by Dr. Rudy Boonstra. The station is accessible by road from the Alaska Highway.

Portland Island is a part of the Gulf Islands National Park Reserve. The island is 534 ha and accessible by boat only, a 30-45min trip from Canoe Cove Marina on Vancouver Island depending on weather. Facilities on the island are very limited, there are 3 campsites with pit toilets and no running water or electricity. Researchers spending time on the island are supported by the Pacific Research Station located on Vancouver Island.

Located north of the Brooks Range in Arctic Alaska lies the Toolik Field Station operated and managed by the Institute of Arctic Biology at the University of Alaska Fairbanks. Originally established in 1975 to support aquatic research its mission today is to support research and education that creates a greater understanding of the Arctic and its relationship to the global environment. Amenities include housing, meals, and laboratories in addition to support services for arctic research and education to scientists and students from universities, institutions, and agencies from throughout the US and the world. Research support includes GIS and mapping services,technical and IT assistance, shared commonly used equipment, and collection of standardized environmental data. There is also an animal handling and surgical lab established and run as part of Team Squirrel (in collaboration with Drs Brian Barnes and Loren Buck). The station is accessible by road along the Dalton Highway (featured prominently on IceRoad Truckers).